It all started when I first published my first book "Boy Scout Stamps of the World" in 1949.  In 1948 I had written to the national director of publications of the Boy Scouts of America asking if permission was required and whether the national organization would print or buy the publication I had written.  The answer was discouraging, and if it had not been for Arthur McKinney, former Scout Executive of Chicago Council, and the Assistant to the Chief Scout Executive, perhaps the book would never been published.

Before McKinney had left Chicago a few years before, I had met him as a fellow stamp collector who showed interest in a book on the topical subject of Scout stamps.  The director of publications had mentioned my idea to McKinney who then wrote back to me stating that I should go ahead, even though the BSA was not interested in publishing it.  He felt that the international aspect was of interest, and that if I printed it the National Supply Service would sell copies on consignment.

The first edition of 1,000 copies was 32 pages, plus cover, and sold for only $1.00 a copy.  It included the 1948 U.S. Girl Scout stamp honoring Juliette Low and mentioned that I hoped that the Post Office would also honor the B.S.A. in the future.  In 1949 I made a trip to New York City to call on Dr. Arthur Schuck, Chief Scout Executive, and asked him to promote a stamp for the 40th anniversary of Scouting in our country in 1950.  His reply showed little interest, and suggested that perhaps this was something volunteers could promote, rather than the national headquarters of the B.S.A.

I was then a young printing salesman for Redson Rice Corporation in Chicago, and Mr. E.G. Rice was writing a manual of postal information for the envelope industry to give to their customers.  Since Mr. Rice made frequent trips to Washington to see Postmaster General Donaldson, I asked if he would give a copy of my book to him, and ask if the Boy Scouts could have a stamp in 1950 to honor their 40th anniversary year.  Donaldson told Rice that was a great idea, and to have his salesman get the national B.S.A. headquarters to contact his office about a design.  And that is how on June 30, 1950 at the second National Jamboree at Valley Forge our first U.S. Scout stamp was promoted.

By this time I was publishing my second edition to include this new stamp and my correspondence was mounting day to day.  The questions always seemed to be where these stamps could be purchased and interest in trading with other collectors.  About this time Jerry Husak in Milwaukee had started ATA, the American Topical Association.  In November 1951 a Kansas City collector had started "Youth Organizations on Stamps" with ten members and a written bulletin.  Having seen my book he invited me to be a member.  Since he included communist youth stamps I declined to join, but suggested that if limited to Scout stamps ONLY I was interested.  That is how Howard D. Bearce asked if I would consider being president if the name was changed to Scouts on Stamps Society as I suggested, and he would consent to be secretary and editor of the bulletin.

I discovered that Art McKinney was already a member so I got his OK to be a Director.  One of McKinney's jobs on the national B.S.A. staff included international relationships, so that I was able to get information with his help on Scout stamps already issued as well as promotion of new issues.  He sent copies of my book to 50 or more countries.  McKinney was a dignified, quiet man, very diplomatic, and a wonderful friend to me and our Society.  In later years in retirement he became the Stamps Editor of Boy's Life magazine, and also President of our Scouts on Stamps Society International, and my co-author of "Scouts on Stamps of the World" in a future issue.

I do confess that I had hand picked all the officers in the early years of our Society.  My only guide was their Scouting records and since I had not met most of them, I based my selections on those having the Silver Beaver or being Scoutmasters, or Eagle Scouts.  This continued for the first five years under the guise of "elections" with only one slate of officers to vote for.

The first issue of the SOS Journal was Volume 1 #5 in March 1952 when "Youth Organization on Stamps" became "Scouts on Stamps Society."  It was not until 1956 that I suggested the addition of the word "International" making it SOSSI.

The first meeting of the Chicago area members was on Sunday, November 15, 1952 in my home in Winnetka, Illinois.  This meeting is recorded on page 6 of Vol. 2 #2 of our Journal, and later became Baden-Powell Chapter #1 in 1954.

The first national Society convention was held July 19, 1953 at the 3rd National Jamboree of the B.S.A. in Santa Ana, California.  There were 8 of us present.  At this Jamboree our small display of Scout stamps and covers created such interest and reeled in getting new members from many states.  Since this event SOSSI has been represented with their conventions at all National Jamborees of the B.S.A.

Our first World Jamboree convention was in Canada in 1955.  I had several Canadian members in our Society by that time, and they promoted their stamp for this Jamboree.  I was honored as the President of SOSSI at a luncheon for all the national presidents of the countries represented.  We had our first Society World Jamboree cacheted covers at this Jamboree. 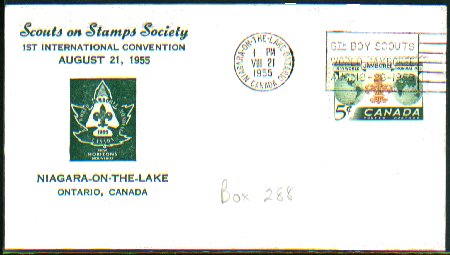 Perhaps my greatest contribution in promoting our hobby came in 1957 when the World Scout Bureau printed my articles in World Scouting magazine.  In 1956 I had the Chief Scout of Korea, Bill Rhee as my house guest.  His patrol of Scouts were on a world tour and stayed in the homes of our Scouts in Winnetka, Illinois.  Bill had never known of Scout stamps before, and was intrigued with my collection.  He asked if I would help him to get a Scout stamp for Korea.  In my living room, he and I designed the stamp to be issued in 1957.

It was Bill Rhee's plan that was to become a pattern for many other countries in the future.  He asked if I would please send copies of my book to their Postmaster General, and also to Sigmond Rhee, their President.  However, he wanted there to be a letter from me telling their Scouts deserved the stamp.  I asked what they had done to deserve this honor and he related the many years of Good Turns during war, famines, and floods in which Scouting had served their nation.  However, Bill asked that my books and letters be sent at the same time their National Executive Board was requesting the stamp.  Well, you know it worked, and they got the stamp in two values.

This Korean plan was reported in my World Scouting articles and for several years resulted in other Scout countries getting postal recognition.  This afforded me with information on new issues as well as stories behind the stamps designs and pictures used.

And that is a short history of the Society's early years as I remember.  There have been many officers and members whose dedicated interest in SOSSI has made our hobby what it is today.  We have a wonderful topical history in Scout philately that is better because of our SOSSI Journal, local Chapter meetings, conventions at Jamborees, and new friendships.  You and I help to promote this hobby as well as world Scouting.