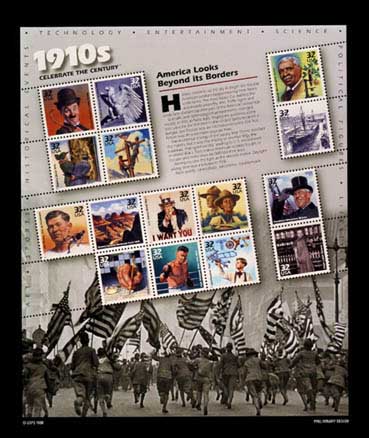 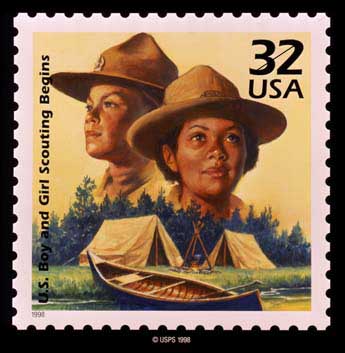 WASHINGTON -- The U.S. Postal Service announced on December 11, 1997 the first 30 postage stamps to be unveiled as part of the Celebrate the Century program -- an unprecedented commemorative stamp and education program that will honor the most memorable and significant people, places, events and trends of the 20th century, to include the Scouting movement.  This formal announcement had been anticipated since the first given during the SOSSI meeting held at the 1997 U.S. Boy Scout Jamboree.

The 30 stamps commemorating the years 1900-1909 and 1910-1919 were unveiled one per day over 30 consecutive days -- Jan. 5 through Feb. 3, 1998 -- in cities across the U.S.  On Feb. 2, a stamp honoring Scouting (1910s) was unveiled at Seattle Center, Seattle, Wash.  All 30 stamps were issued Feb. 3 at a special First Day ceremony in Washington, D.C. SOSSI President Lawrence Clay and Director Randall Frank were present as our representatives.  The stamps are now available at all U.S. Post Offices for $4.80 on collectible sheets of 15 commemorative stamps each -- one honoring the 1900s and one honoring the 1910s.

The design of the 1910s sheet features Boy Scouts marching on New York City's Fifth Avenue to encourage people to buy World War I Liberty Loan Bonds.  The reverse of the sheet has text printed on each stamp.  The text for the Scout issue reads:

The Boy Scouts of America was formed in 1910, and the Girl Scouts of the U.S.A. (at first known as Girl Guides) in 1912.  Both groups introduce youth to a variety of outdoor activities and promote self-reliance and resourcefulness.