The Leaping Stag is the "miraculous deer" of Hungarian legend.

One day, many years ago, Hunor and Magor were out hunting with a number of men.  Suddenly, from a thicket, jumped a beautiful white deer and the hunters started in pursuit.  Over mountain sides, across rivers, through valleys and forests, they followed the magnificent animal until they lost the trail in the darkness.  The hunters were forced to camp for the night.

In the morning a glorious sight greeted their eyes.  In the wild ride they had crossed the borders of their own country and had entered a country about which they had never heard, a country richly endowed with good soil, beautiful forests, fruit, game and fish.

Hunor and Magor decided that this was the land of their choice.  They went back for their father's blessing and then returned with their wives to this rich new land.  It is told that their descendants prospered and became the Huns and Magyors of the Hungarian nation.

The Leaping Stag of the Jamboree was to lure Scouts from many countries to the friendly Jamboree camp.  26,000 Scouts from 48 countries attended this 4th World Jamboree.  Hungary was a part of the world brotherhood of Scouting until 1947, when it was banned by communist dictators.  It has since been renewed after the democratic reforms beginning in 1992. 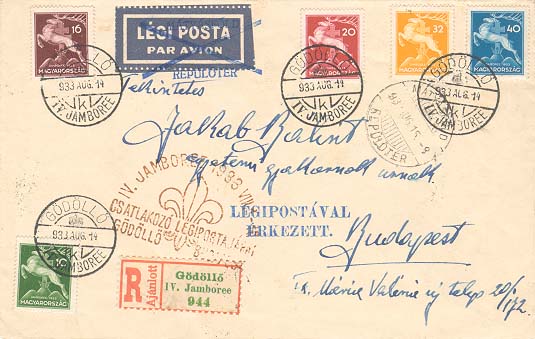